The second match of ’s tour with the England Lions looks to be petering out to a draw, due to bad weather. The concern for is Tim Southee’s injury. Mark Gillespie, a strike bowler, failed to pick up wickets in the Derbyshire game and Doug Bracewell and Neil Wagner are vying for one of the Test bowling spots. The potential loss of Southee could be a big blow for the Lord’s Test.
A talking point of the first innings of 285 was the dominance of the young opener Hamish Rutherford who blunted the Lions’ attack. made 126 off 155 balls before being run out. He’s a dasher and a different player to his father, but I still remember the great innings Ken Rutherford played against DB Close’s XI on the 1986 tour, his first tour to .  (This was also the tour that New Zealand secured a famous Test series victory on English soil.)
had a torrid start to his international career. For years his career average suffered from his early Tests where he was easy meat for the quicks.
Yet, at (1 September), playing the last fixture of the 1986 tour, in which he was mainly a batting reserve, made a magical 317. Considering the first innings score reached 519-7 declared off 94 overs, they made the runs at a cracking pace. Martin Crowe made just 1 and all-rounder Evan Gray contributed 88.
The DB Close XI were no slouches, comprising Javed Miandad, Sadiq Mohammad, CL King and Geoff Boycott in the batting. Bob Taylor the wicket-keeper played along with bowlers Chris Old, West Indians Roddy Estwick and Franklyn Stephenson (792 first-class career wickets) and Dilip Doshi the Indian spinner.
Doshi went for 142 runs off his 22 overs, almost Twenty 20 pace these days. In one Doshi over, hit him for four sixes and looked good for equalling Gary Sobers’ record of six sixes off a first class over before Doshi closed him out with a low, flat delivery to save his blushes. Miandad made an unbeaten 102 to help draw the game for Brian Close’s team in the second innings.
When I looked up the score in Ken Rutherford’s book A Hell of a Way to Make a Living (1995), I found the following out. had been out to ‘night spots’ for Willie Watson’s 21st the night before so he was still ‘groggy’. The first hundred came before lunch with Ruds hooking a Stephenson bouncer to square leg on 97 to go to lunch on 101. He slept over the lunch break and then continued the damage, scoring 199 runs between lunch and tea. He continues the story:

Once again I reached a landmark off the last ball before the break. I swatted a ball from Doshi, one bounce into the fence, for four which brought up the triple century. It’s difficult to recall a lot of the detail from the innings. Once I got to around 150 I set my sights on beating my brother Ian’s highest first class score of 222. Once I achieved that I was so far into Wonderland and I just went for everything…The amazing thing about the innings is that it was chanceless. You’d think there would have been the odd miscue but everything seemed to find the middle of the bat and a gap in the field.
Evan was a tremendous help. He constantly rotated the strike and fed me as much of the bowling as possible. Often he was lost for words as the scoring rocketed along. Our partnership was 319 runs in 154 minutes off 291 balls. Evan scored 51 of them from 118 deliveries. When I returned to the dressing room at tea time the team was as shocked as I. John Wright just paced the room, shaking his head and repeating, “Do you believe that. Do you believe that.” The applause that coincided with my entry into the dressing room woke the captain, Jeremy Coney. He had hardly seen a ball of the session. Knowing I’d been on 101 at lunch he enquired, “Gee, Ruds, you must be on 180 odd.” I replied, “No. Jerry, I’m actually on 300.” He laughed as if waiting for the punch line of a joke until Wright told him to take a look at the scoreboard.

was out shortly after tea caught behind by from Close himself for 317. There were 8 sixes and 45 fours in his total. The feat embedded itself in my mind as a youngster in the ’80s. Ken was one of my favourite cricketers growing up, who probably never really achieved the scores and average he was capable of at Test level. His highest score remained his 107* against in a home Basin Test in 1988.
Interestingly my copy of ’s book was picked up at a book fair with no name in the front but inside the previous owner had carefully collected and cut out a series of newspaper clippings and articles on the book, always a bonus to have. The front cover has a barefoot Ken Rutherford, which reminds me (minus the long hair and beads) of the barefoot poet James K Baxter.
’s 317 off 245 deliveries in 230 minutes, the highest score by a player overseas, still stands. In 2000/01, Mark Richardson scored 306 v A, the next best.
would dearly love a similar hard-hitting Test century from Ken’s son Hamish Rutherford on the current tour. His century against England Lions serves as a warning to the attack coming off the back of a sterling hundred on Test debut at the University Oval in earlier this year.

(Sources: A Hell of a Way to Make a Living by Ken Rutherford with Chris Mirams, Hodder Moa Beckett, Auckland, 1995; and the Cricket Archive) 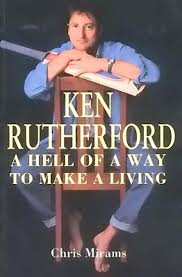