The latest edition of the NZ Cricket Museum Newsletter, Winter/Spring 2011, includes a series of cricket poems from A Tingling Catch, further information about the museum’s touch-screen interactive project and a prose piece by Madeleine Marie Slavick on Jonny Brugh’s one-man play The Second Test (also included on the Tingling Catch blog).
You can download the newsletter as a free PDF from New Zealand Cricket’s website.
The poems from A Tingling Catch were ‘The Record’ and ‘To Bert Sutcliffe, Master Batsman’ (my own poems), 'Ken Wadsworth' by Brian Turner, ‘Poet & Cricketer’ by Ron Riddell (for the late David Mitchell) and ‘A Tribute to R J Hadlee’ by Ian Donnelly.
A further poem of mine, ‘At the Basin’ for Daniel Vettori, first published by Joseph Romanos in The Wellingtonian, was also included.
Thanks to David Mealing at the for his work on this as well as the exciting new touch-screen interactive initiative.
The now has a new website too: http://www.nzcmuseum.co.nz/
﻿

Posted by Mark Pirie at 2:34 PM No comments:

Reviews of A Tingling Catch: An Index

After finding the latest review of A Tingling Catch in Investigate, I also noticed that Terry Locke's online review from last year has since appeared in the journal English in Aotearoa distributed to High School English Departments. I'll make a full list of the reviews so far here as an index:

Index of Reviews of A Tingling Catch

Email ThisBlogThis!Share to TwitterShare to FacebookShare to Pinterest
Labels: A Tingling Catch Index of reviews

Investigate review of A Tingling Catch

The following review by well-known Auckland writer Michael Morrissey appeared in Investigate magazine, April 2011. I've just come across it, and it's a good review. Nice to get. Thanks Michael. Coincidentally, there's a documentary, Daytime Tiger, about Michael playing at the Wellington International Film Festival next month.

The reviewing of a book of cricketing poetry by someone who doesn’t play the game, should prove an interesting challenge. Like everyone, I am familiar with cricketing metaphors – stuck on a sticky wicket, clean-bowled, stumped, middle wicketed, run out, and so forth. The English language owes a lot to cricket - more than to any other game possibly. It is, after all, the quintessential English game. And up until recently we were a very English society. I am sure long after we become a republic, we will still be playing cricket.
Cricket’s local poetic origins can be traced over 150 years reaching back to Pember Reeves and Thomas Bracken and beyond (thereby preceding football) and the range of poetry as noted by expert editor Pirie, ranges from ‘rhyming verse, to free verse, and open form, to haiku and tanka (Japanese forms), to limericks and remakes of well-known stage and pop songs.’ This wide poetic catchment enables Pirie to include the relatively recent ballads of Jim Tocker and the more up-to-date poems of Tony Beyer or Murray Edmond.
On the basis of this selection, our most prominently featured local cricket legend is the great Richard Hadlee, rated by some as the greatest fast bowler of all time. He is celebrated in Ian Donnelly’s straightforward, ‘A tribute to R J Hadlee,’ in Robin McConnell’s more sophisticated, ‘the intense disciple: Richard Hadlee shade and light’ as well as in Pirie’s ‘At Lords’. Pirie felt compelled to remind our Australian cousins of our bowling star when Lillee was mentioned - though cricket lore has it that Hadlee modelled himself on Lillee, so the two are inevitably linked.
Being of an older generation, I remember Bert Sutcliffe most strongly. Sutcliffe was said to be the world’s greatest left-hand batsman and is acclaimed in one of Pirie’s poems as ‘our Bradman’. The compliments don’t come higher than this. Sutcliffe showed his true mettle by returning to the crease with his head bandaged after an injury and proceeded to score 80 with fellow batsmen Bob Blair whose fiancée had died that weekend. The ‘right stuff’ is the phrase that springs to mind with these two stalwarts.
One of the finest poems is the ‘The Batsman’ by Brian Turner (brother of famed cricketer Glenn Turner):

A notable presence is absent from the room,
I am told, demands a relief in the famous
as a possibility. His boots lie on the floor
of the wardrobe, their whiteness
fading, grass on the sprigs.

But possibly - and curiously - my favourite in the selection is ‘gasometer/ponsonby’ by David Mitchell. Like so many of the contributors, Mitchell is more famed as a poet than on the pitch but was recognised as a player of promise when at school and remained a keen cricketer until recent times. Unlike most of the contributors, Mitchell is typically interested in what is happening on the sidelines, off the pitch, as it were. In this case, three meths drinkers:

It may not be cricket but it’s a vivid exploration of what’s going on just wide of the field. Poignant, cheerful, open-formed, this collection celebrates all aspects of the game – even those beyond the boundaries.

This weekend was the Downtown Community Ministry’s annual book fair. Always a good time if you're a book lover. One book I picked up happened to have a cricket limerick inside, which I’ll share with you here.
The book is by Douglas Catley entitled A Dabble of Limericks and was published in 1973. He also published a collection of poetry, Thoughts of a Wonderer, in 1969. Catley was a designer, engineer and inventor. I’ve never come across him before, but his limericks are an entertaining light read.
The biographical note on Catley states that he was born in but left when he was two “because he couldn’t stand the milk”. He grew up in , in the North of Auckland, and as a young man crewed in Auckland-based yachts. He worked for the Fire Service, studied maths, advanced engineering and electronics. Through this, he qualified as a member of the Institution of Fire Engineers of Great Britain, and later ran Enterprise Engineering in .
DOUGLAS CATLEY
Cricket
A famous big-hitter in cricket
Slamm’d his on-drive into a thicket
Where girls tann’d in the nude
And no gent would intrude,
But long-on was on a good wicket.
© Douglas Catley, 1973
(From A Dabble of Limericks, Cape Catley Ltd, 1973)
Posted by Mark Pirie at 7:31 PM No comments: 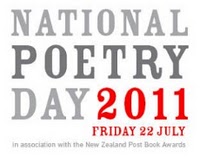 Today is National Poetry Day in New Zealand. All over the country poetry events and readings are taking place. I thought I should post for fun a new cricket poem for Poetry Day. So here it is. This year we've seen a lot of discussion and changes to ICC cricket laws such as not allowing a runner for batsmen. Well, in space cricket the catch is something else again.

What is space cricket?

Well, it’s
the new craze
but the catch
is aliens
come on
as subs.
They’re a bit
quick
with the ball,
tho’, they
bowl with their
tails up
literally.

It sure can swing,
can’t it?

Yes, but
they only bowl
2 overs, so captains
can choose at
which stage
to bring them
on from
their favoured
pit end.
And the batting
power-play?

Well, again,
the aliens can
hit too well, they have
special vision,
can pick any
human delivery
early.
They only bat
for 2 overs, then
retire out, unless
all the humans
are out, and then
they can bat on,
last alien
standing.
Poem © Mark Pirie 2011
Posted by Mark Pirie at 6:39 PM No comments:

This is the first post I’ve done for a while. During the off-season in , I’ve been busy doing other things, so expect posts to be intermittent at this time.
This month I came upon another cricket poem written by Des Williams. Des recently sent it to the NZ Cricket Museum. Curator David Mealing passed it on to me, and I asked Des if we could share it with others on the blog. So here it is.
The poem is about Master Batsman Glenn Turner scoring his 100th First Class century on 29-31 May 1982, a triple unbeaten century. The poem in rhymed quatrains is an historical and entertaining look at Glenn’s fine achievement:
DES WILLIAMS
One Hundred Tons of GMT
Today Glenn reached the milestone cricket fans have waited for
His hundredth first class century – against
He set himself to do it, and reached his goal in grandest style
An innings supremely masterful – it almost made him smile!
This hundredth century innings, scored before he went to lunch
Enabled him to join company with a most distinguished bunch!
The others who’ve achieved this feat, their names are Heaven-sent
Sir Jack Hobbs, Compton, Cowdrey and Woolley, the pride of
Some slightly less familiar names have rightfully earned their place
Tyldesley, , Sandham and Mead, not to mention Dr Grace!
’s Hutton, Sutcliffe and “Boycs”, stand among the best
Geoffrey’s 100th was against , scored in an Ashes Test
John Edrich, Hammond, Graveney, Patsy Hendren and Les Ames
These batting heroes almost complete our glittering list of names
But who could forget Sir Donald, ’s famous Bowral Boy
He treated bowlers the wide world over like his own special toy
And now Glenn Turner joins this team of cricket’s favoured sons
This elite group of batsmen who have scored one hundred ‘tons’
“I don’t care much for records,” I’ve heard the Otago Master say
“If you’re in the middle long enough, they’ll just come your way.”
But the hundredth was rather special, achieved with real panache
On a glorious day at New Road, treating Bob Willis to the bash
The scoreboard rocked unceasingly from Glenn’s audacious raid
As the runs just kept on flowing from his Duncan Fearnley blade.

He cruised on past three hundred, kept his wicket intact all day
Not since Robertson in “Forty-nine” had quick runs come that way.
By chance, Billy Ibadulla was there, with a wide celebratory grin
As he carried out Turner’s trademark drink - a large tonic and gin!
So the sun shines on cricket, every now and then
Tho’ we haven’t always appreciated our master batsman, Glenn
For several summers our maestro, no test match runs he scored
Thanks to Mister Walter Hadlee’s New Zealand Cricket Board!
© Des Williams, 30 May 1982
Notes: Championship, 1982, Worcestershire v Ground, New Road,
Thanks for the poem Des and to David Mealing at the NZ Cricket Museum. It was nice to look up these historical facts on Cricinfo relating to Turner too.
Posted by Mark Pirie at 11:50 AM No comments: