A Tingling Catch in Wisden Cricketer

The following brief review of A Tingling Catch (by the books editor) appeared in The Wisden Cricketer, , April 2011, p. 95. The Wisden Cricketer is the ‘world’s No. 1 cricket magazine’ and is published monthly. It’s great to have a mention:
IN BRIEF
A Tingling Catch: A Century of Cricket Poems 1864-2009 edited by Mark Pirie (HeadworX, pb, 189pp)
Natural events have put New Zealand’s sporting fortunes into perspective but in purely cricket terms New Zealand have had a rough time recently, losing
4-0 to Bangladesh and 5-0 to India in successive one-day series. Mark Pirie’s anthology is therefore timely to soothe those sores. Most of the verses are composed by some of the country’s literary names. Then there is Colin Croft’s ‘When Hadlee Bowls the Ball’, on ’ 1979-80 tour: ‘Don’t want to play with those flamin’ Kiwis / Don’t want to play them in a Test, / Don’t want to play with those flamin’ Kiwis / Before they came along we was the best!’ That’s more like it, though it is worth noting did not lose another Test series for 15 years.
I should note here in case there’s any confusion that the song mentioned by 'Colin Croft' (the fast bowler) is by ‘Colin Croft and the Maiden Overs’, a satirical group at the time, who penned the song. The lyrics to the song were first published by Sir Richard Hadlee in his collection Hadlee's Humour (1982).
The Wisden Cricketer website has recently been revamped and is now called The Cricketer: 'the new number one website for all supporters of English cricket'. The website includes, among other things, feature articles from The Wisden Cricketer (click on the heading Magazine). It's well worth following.

A few years ago I read a very interesting article on cricket poetry by Suresh Menon, an Indian cricket writer. It first appeared in Wisden Asia Cricket magazine in 2004 and was republished in cricinfo magazine's 'Print Run'. Here's the link: http://www.espncricinfo.com/magazine/content/story/355332.html
It's a good introduction to cricket verse for the uninitiated with some famous quotations from poems by John Arlott and Alan Ross, two great cricket writers and cricket poets. Enjoy.
Posted by Mark Pirie at 8:25 PM No comments:

Today is Tingling Catch’s 100th post since October 2010. To celebrate I found a photo of myself raising my bat. The photo was originally taken for my 50 in publishing in 2008 (50 books published by my publishing company HeadworX at Winter Readings 2008, an event at City Gallery, ). Nevertheless, it will do to raise the bat again here. My bat in the photo, a GM Cannon, is the one that I used for club cricket. I’ve always liked GM bats. Stephen Fleming, a favourite player at the time, used GM bats when playing for . 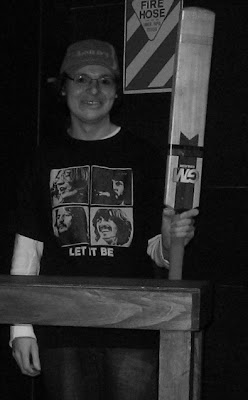 I also had a dig into my poetry files and unearthed a cricket poem from 1982 by the late  poet and song-writer Jim Tocker about a club cricketer reaching a century against ‘mighty ’. Tocker, a club cricketer, composed nearly 50 cricket songs for the former Old Collegians’ Cricket Club in between the 1970s and 80s. They were collected in his sole publication, Songs of a Cricketer, which ran into several editions and was privately distributed to members of the club and interested friends and family.
JIM TOCKER
A Hundred Today
I’m as pleased as Muldoon in November,
I’m as happy as kids in the hay.
No more a duck-scoring man with no luck,
I have made us a hundred today.
We were matched against mighty –
Bowling from their team is seldom astray.
Though I was dropped when a ball really popped
I have a still made a hundred today.
In their first little burst
They were doing their worst
With their big bowling guns.
Then we found we could pound
All their bowlers around
And we piled on the runs.
When I finally got to three figures
I knew I’d always be able to say:
“You really strive and you’ll score just as I’ve
Made a hundred, a hundred, a hundred, a hundred
a hundred this wonderful day!”
© Jim Tocker, 1999

(From Songs of a Cricketer by Jim Tocker, self-published, 1999 edition)
(Note: Muldoon is Rob Muldoon, then Prime Minister of New Zealand. Tocker also states humorously that the poem/song is to the tune of ‘I’m in Love with a Wonderful Guy’.)
Posted by Mark Pirie at 9:51 PM 2 comments: